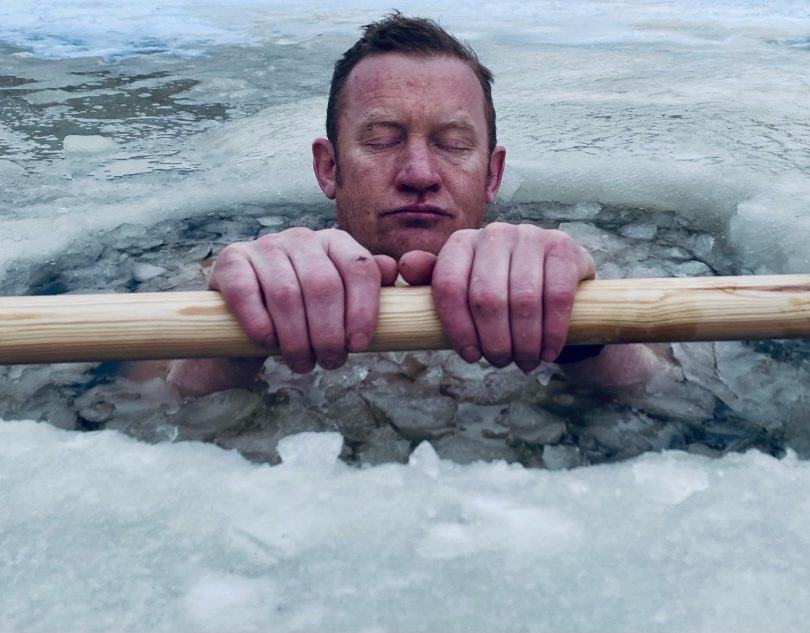 My first experience of cold water was ice breaking drills with 20 Commando Battery in Norway, winter warfare training, even to this day that memory is etched into my mind and soul.

Regardless of how terrible an experience it was back in 1995, I look back and ponder “if only I knew then what I know now” with a joyful smile on my face, as a certified Wim Hof Method Instructor.

How I found the Wim Hof Method

Where and what had I become? Society and the stresses and strains of life had resulted in me needing to stop working and I took time off from being self-employed. Months passed doing odd jobs here and there to earn money with as little stress as possible, yet enough to live on and enjoy simple pleasures such as going to the gym and going out.

It was at the gym I eventually found love, a feeling that I hadn’t felt in years as I had become numb and supressed my emotions. Even though I had found love, it wasn’t love. The woman I fell for was toxic and knew how to manipulate me, triggering deep seeded traumas I had buried deep inside myself, from childhood bullying, emotional abuse, and co-dependency conditioning from the family unit. After 4 years the toxic relationship ended badly.

As these undealt issues arose I knew I needed to find help or I felt I might go insane. A friend from my high school years, now a trained psychotherapist and counsellor, reached out and introduced me to a book on co-dependency, “a taught condition from our environment”. Mine came from the way I was raised, very strict and disciplined, children were to be seen and not heard back then.

My friend then asked me along to an open group therapy session. Unbeknown to me, I was going to be a participant and not an onlooker, which I presumed I would be as I had just started a degree in psychology.

After we’d all settled down, brief introductions were made, and the routine of the therapy session explained, a tall, long grey-haired man appeared (to me he looked like a hippy) and he explained the breathing that we would be doing prior to the talking therapy session. “This was the first day of the rest of my life.”

We were all asked to lie down and get comfortable with gentle music playing in the background. I felt rather stupid, here’s me, an ex-British Army Commando, lying down and being told how to breathe, how on earth did I end up here?

As the breathwork began I started to relax and go with what was being said. I cannot remember how long we were breathing for, yet by the end of, who knows how many rounds of breathing, 45 minutes had passed and I felt completely relaxed, and a little spaced out. After a few moments we all gathered ourselves back into the room. We took a break for 5 minutes for the bathroom and water if needed. At this point it gave me the opportunity to talk to the grey-haired gentleman. In the next 5 minutes my mind was opened by what he said he did every morning, “I do breathwork and lie in the local river come rain, sun, wind and snow”. Instantly I thought – “he’s mad”. Yet I also made the connection of going into ice cold water, from my winter warfare training in the military, where  we‘d ski into a hole cut in a frozen lake in Norway in January.

I also thought to myself at this point “F*#k that” I did it once, never again. Our conversation lasted only a few minutes, yet unbeknown to me the seed had been planted, unconsciously I was hooked before I had even seen the river, ice bath or got home to Google/YouTube search who or what is the Wim Hof and his method. The rest of that day was long, as we each opened up about the dark, hidden, troubled parts, and past of our souls.

A few weeks later, whilst climbing Ben More, a mountain on the Isle of Mull, my light bulb moment happened. I’d been practicing cold water immersion at home with my right hand in a bucket of ice water for a few weeks since the therapy session, and here half way back down this cold mountain, one hand was warm and the other was cold. All the YouTube videos were right, the vascular system can be trained, increasing the blood flow in one hand and it was at this point, I knew if I could train the capillaries in my hand, why not my whole body.

On returning home I made the call to meet the Wim Hof Method (WHM) instructor again early the next morning.

5.30am at the riverbank, “Jesus what am I doing here” – I thought. It’s Scotland, cold, dark and I was about to get wetter than our traditional summers. Yet there was this instructor standing looking at the river with a smile on his face. After a discussion and confirmation I’d done the breathwork before coming down, it was time to get in the river.

As I slowly walked in the bite of the river’s water, around 9 degrees Celsius, soon hit me. Instantly I thought of Norway yet also thought of my hand and that I could do this. Knee deep in the river the instructor prompted me to take 3 deep breaths to compose myself and on the start of the final exhale to sit down and lie back.

Boom I was there, up to my neck in cold water, huffing and puffing trying to catch my breath, guided by a few simple words on how to control the breath. It stopped the panicking, I was kind of in control, yet my body was lit up like a Christmas tree. Every nerve was alive, and I was enjoying the experience, unlike my army experience.

My name is Darren Adam and I was on a destructive path begging for help, depressed, packed with social anxiety and PTSD. I had unprocessed childhood trauma, my time in the military as well as a motorcycle crash which all led me to therapy. In this unusual setting I found the Wim Hof Method for the first time. Finding the WHM and experiencing its power was the catalyst to my whole life changing. And now I want to help you change yours.